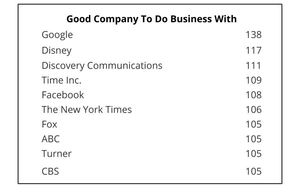 When it came to search engines, Google’s engineers won by creating the definitive user experience. Now Google’s ad team is doing the same with its primary users -- advertisers. While Google has evolved well beyond its search roots to become one of the most dominant players in display, video and now mobile advertising, its focus on its end-user experience has made it the No. 1 media company advertisers want to do business with -- by a wide margin.

Google, which first emerged as the No. 1 company advertisers want to do business with in 2013 -- the first pure-play digital company ever to do so in Advertiser Perceptions Inc.’s periodic “Media Company Report” -- continues to distance itself from the rest of Madison Avenue’s pack. With the average of all media companies indexing at 100, Google scored a 138 in AP’s just-released 2015 report, 21 index points greater than its next-closest rival (Disney) and 30 points greater than its next closest pure-play digital rival (Facebook).

The 15 individual criterions AP uses to measure and rank advertiser experience -- what the company calls “AX” -- hasn’t changed over the 22 times it has fielded the study. “Ad results” remains No. 1, followed closely by “customer satisfaction,” “easy to work with,” “understands my business” and “quality audience/circulation practices.” What has changed is the names of the company’s advertisers most associate with those attributes.

“Looking back to Wave 18, the top 10 media companies consisted of a mix of traditional media leaders from TV and print with Google and Yahoo showing up here and there for ‘ad results’,” explains AP’s Frank Papsadore. “Fast-forward to Wave 22, and it’s the digital media brands that lead the pack, with Google on top by a wide margin.”

While that’s true of “ad results,” which are dominated by Google, Microsoft, Yahoo and Facebook (see below), when all of the most important criteria are factored in, only Google stands out in terms of the overall advertiser experience, according to AP. 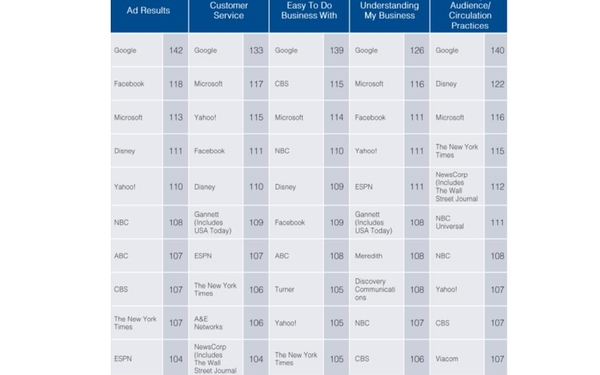