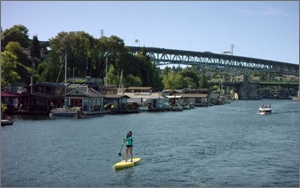 The effort, from Publicis Seattle, includes a Seattle-focused TV series “Sounds by the Sound” premiering Oct. 2 on Revolt TV, which is owned by Sean Diddy Combs.

The series will explore Seattle's music scene and will feature a mix of interviews with emerging and established artists and performances at city landmarks such as Chihuly Garden & Glass, Kubota Gardens, the Space Needle and CenturyLink Field.

One episode, filmed inside CenturyLink Field, examines how music influences sports and includes interviews with the Seattle Seahawks' own DJ (the only official team DJ in the NFL) and the up-and-coming band The Flavr Blue.

Separately, "First Takes" is a video series showcasing actual Seattle visitors describing their first visits to the Emerald City. The series, directed by documentary filmmaker J. Austin Wilson of production company Society, will be featured on a new branded Web-based TV channel on the Visit Seattle Web site called VISITSEATTLE.TV and also through social media and other online destinations.

The decision to create a purely content-based campaign dovetails with the increased importance of video for travelers and the new way they are consuming content. It represents the first time a destination marketing organization (DMO) has taken this approach to marketing, according to Visit Seattle executives.

"During the past 20 years, Seattle has become known as an incubator for new music across all genres, so we decided to tap into Seattle's rich music talent as one focus of our new campaign," says Tom Norwalk, Visit Seattle president and CEO, in a release.

The “First Takes” series features a wide range of traveler experiences ranging from first-time oyster tasting to smelling fresh roasted coffee to taking off in a seaplane over the Puget Sound.

"We're excited about this series because of the authenticity of the messaging when it comes from the mouths of the visitors," said Ali Daniels, Visit Seattle VP of marketing, in a release. "We are spoiled by what we have in our backyard, and it is eye opening to see it through a first-time visitor's eyes. To hear someone describe paddle boarding in Portage Bay or watching the sun rise over Gas Works Park makes you fall in love with your city all over again."

The campaign is funded by the Seattle Tourism Improvement Area, a dedicated marketing fund assessed from guests at 54 downtown Seattle hotels.