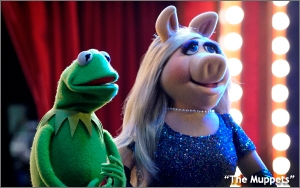 “The Muppets” is just like “30 Rock,” only with puppets. The similarities dawned on me about midway through a viewing of the first episode.

Kermit is Liz Lemon. Miss Piggy is a combination of Tracy Jordan and Jenna Maroney (played by Tracy Morgan and Jane Krakowski on “30 Rock”).

The other characters in “The Muppets” (premiering Tuesday night on ABC) are like the supporting players in “30 Rock” -- writers, assistants and other studio personnel who are all involved in the production of a fictional TV show. This one is a late-night show called “Up Late with Miss Piggy.”

Like Liz Lemon (Fey in “30 Rock”), Kermit is the beleaguered show-runner who has to put out fires and deal constantly with the eccentricities of his show’s star and backstage staff. “The Muppets” is a one-camera situation-comedy filmed docu-style. “30 Rock” was not a mock-doc, but the similarities between the two shows are decidedly unsubtle.

Putting this show’s copycat aspects aside and based on its merits, “The Muppets” seems well-positioned for success in the early-evening time period of 8-8:30. The show is slickly produced, brightly written and the Muppet characters interact more or less seamlessly with the show’s human characters. And as a brand, the Muppets are almost universally beloved. So how can it miss?

A TV critic is always tempted to go on and on pointing out flaws and faults in new TV shows, but criticizing the Muppets is like coming out against puppies. Nobody in their right mind would do it. Enjoy the show -- there is much to like.

Later on Tuesday night, the new CBS drama called “Limitless” seems less of a sure thing. This show is the second new fall show in two consecutive evenings to be adapted from a feature film (the other one was “Minority Report” Monday night on Fox). The “Limitless” movie starred Bradley Cooper and he appears in the premiere episode of the TV version.

In the “Limitless” TV show, a young man named Brian (played by Jake McDorman) is the one who gains access to a powerful little pill that sharpens one’s brain, to put it mildly. Without going into the neurological details, the pill endows Brian (whose name is an anagram for “brain”) with new skills somewhat akin to superpowers (but not the kind where bullets bounce off his chest like Superman).

The little pill changes the life of Brian, and he is soon identified as a potential asset to the government as he catches the attention of an elite squad of FBI agents involved in investigating the manufacture and distribution of this mysterious pill.

CBS seems to love these kinds of procedurals -- with their “elite” teams of young, no-nonsense investigators. While “Limitless” is certainly another one of these, the premiere was not the same old thing either. Filmed in and around Manhattan (including Union Square and Columbus Circle), the action sequences in the premiere episode were not only eye-catching, they actually seemed credible too (something that can’t usually be said about these kinds of shows).

My only reservation about the “Limitless” scenario is its seeming embrace of a drug as a solution to one young man’s problems (at 28 years old, he’s been a relative failure in his adult life up until this point). “Limitless” will have to work this problem out in future episodes, if it should last so long.

One show that does not deserve to last long at all is “Scream Queens,” which is having a two-hour premiere Tuesday night on Fox. This tasteless, grotesque series is being highly touted by Fox, which seems very proud of the show’s campier aspects. It’s about an evil sorority on a fictional college campus whose leading members (led by Emma Roberts) are so caught up in their competitive social world that people close to them get murdered occasionally.

One of its hyped-up gimmicks is the appearance of various young stars in guest roles. In Tuesday night’s premiere, these include Ariana Grande, Lea Michele and Abigail Breslin. One or more of them will be killed off in each episode. This is supposed to keep viewers tuned in every week to see who gets knifed or run over with a riding mower.

The problem with “Scream Queens” is that in its effort to go “over the top” in its portrayal of a wildly exaggerated snooty sorority, it manages to be offensive and vulgar at every turn. This is a show that starts at 8 o’clock in the evening, and it’s not long before the Emma Roberts character is accusing the college dean -- played by Jamie Lee Curtis -- of being a “box muncher” and the like.

My experience watching this show went something like this: At some point I wondered how much longer this show would continue and then realized that only 27 minutes had elapsed. It felt more like two hours, but rather than scream, I just groaned.