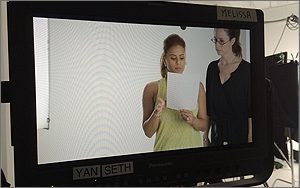 The videos have attracted a steadily growing audience and more than seven months after its debut, the campaign experienced a 600,000 jump in views in one week. Total YouTube views to date: more than 3.1 million.

The featured stylists were carefully selected--all have huge followings on their blogs or Instagram pages and are active in promoting the top brand haircare products to their audiences.

Garnier worked with DigitasLBi, New York-based Persona Films and its sister company Twitch Post to create the concept. The entire project was developed and executed in under a month with 12 videos that were shot in five days in a New York studio.

The social media campaign appears on Garnier’s website, Garnier’s YouTube Channel, and the vlogger’s own sites and will continue through the end of the year with vloggers releasing a number of new supporting videos. Some are more popular than others. Vloggers Lindsey Hughes and Heart, for example, have over 400,000 views each.

While online views are a main metric for success, the campaign's larger goal is to make Garnier cool among younger users and to build brand awareness through the support of these influential vloggers.

“Creatively, this project was a fun challenge because I had to maintain the authenticity of each vlogger, and understand their unique style, yet integrate the Garnier brand," says Honor. "Relaxing the talent on set so they could express themselves and personalize their special take on the hairstyle was really important to me.”