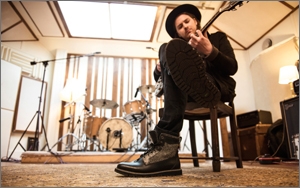 Timberland and strategic agency Yard are teaming up to launch Timberland’s new Fall ’15 global marketing campaign: “Made For The Modern Trail.”

The launch follows the brand’s move to redo its Web site this spring.

The new campaign is a departure from previous efforts, said Yard Founder and Chief Creative Officer Stephen Niedzwiecki. "Timberland is re-defining what it means to be outdoors, bringing it closer to the city.”

The campaign, he added is “centered around the everyday adventures of city life."

The idea is to encourage outdoor exploration by urban shoppers. The spots were filmed in a variety of locations, with the city's landscape playing a role in all of them. For instance, one ad shows someone hiking with the skyline in the distance.

While Timberland has long had connections to music, this campaign represents the first time the brand has engaged in an extensive partnership with an artist--Jaime N Commons--whose new album debuts this month. Music from the album will be featured in the prominently in the new effort.

Commons, an emerging talent, was already on Timberland's radar as a potential artist to help showcase the brand’s new campaign. He’s perceived as someone who embodies the "Timberland spirit."

In a series of narrative ads, Commons, his producer (Alex da Kid) and band members are shown "on their journey along the Modern Trail," meant to give viewers a window to Jamie’s creative process.

The spots follow Jamie, as well as a group of fans, as they make their way to a concert, stopping along the way at an urban farm, a farm-to-table restaurant, a rooftop garden, and an urban loft. Jamie, of course, is wearing apparel and footwear from Timberland’s new Black Forest Collection. The final spot culminates in an outdoor, private performance that is shown high above the city of Los Angeles.

In addition to :15-second spots, print will run in outlets like Rolling Stone, in an advertorial featuring Commons; in a four-page piece in Esquire for their 1,000th issue, in a six-page unit in GQ; as well as a Field Guide in Hypebeast.  There will also be a renewed focus on women’s media including buys in Teen Vogue, Nylon, People StyleWatch, InStyle and Marie Claire.

Parent company Wolverine Worldwide has spent $2.4 million advertising Timberland during the first six months of 2015, up slightly from $2.1 million year-over-year. Timberland's 2014 ad budget was $9.9 million, compared to $8.4 million in 2013, according to Kantar Media.