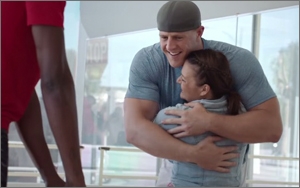 The spots, created by BBDO New York, show the athletes wearing their street clothes rather than uniforms. In a twist on fan support, they are shown supporting their fans as they pursue dreams of their own.

“As part of that, we seek out different ambassadors whose experiences and values can help motivate consumers to dream and go after those dreams fearlessly,” Yancy tells Marketing Daily. “Kevin Durant and J.J. Watt have distinctive stories that transcend sports and epitomize what American Family Insurance and our customers believe in.”

The spots appear regionally in American Family Insurance’s 19 operating states. The effort also include print, digital and social advertising, and an outdoor display that will post messages from Durant and Watt in real time in response to tweeted messages received by fans.

The effort is aimed at dreamers, Yancy says.

“We believe that dreams are the most valuable things any of us ever own,” she says. “Dreams with the right amount of support and championing turn into iconic companies, college educations, the home that becomes more than just shelter, the car that carries you to what's next. If these things are critical to your what's next, you should insure them carefully with American Family Insurance.”

The spot, called "Signs of Support," is part of a larger "Insure Carefully, Dream Fearlessly" platform American Family Insurance kicked off in January during the Super Bowl with Jennifer Hudson, “another champion of dreamers,” Yancy says

In a series of 30-second and 15-second TV spots and a longer online film, the athletes are shown holding handwritten signs, similar to those you'd see at a game, cheering on people, and acknowledging the dreams they're pursuing.

For example, training for a marathon, practicing to be a roller derby skater, or studying to be a nurse, signs say, "Your dream is just 26.2 miles away," "Skate your way to the USA Team," "Mom. Nurse. Student. Hero." The message is that everyone’s dream needs a champion, and Durant and Watt are there to remind people that American Family Insurance is here to be a champion of dreams.