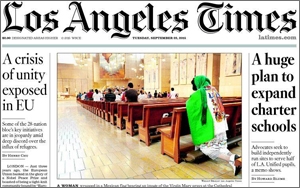 Close on the heels of its abrupt firing of Los Angeles Times publisher Austin Beutner, Tribune Publishing has lowered its forecasts for annual revenue in 2015, citing the poor financial performance of its Southern California newspapers as one of the main factors.

In a statement, Tribune CFO Sandra Martin noted: “Revised guidance reflects lower forecasted revenue estimates for the year, concentrated in Southern California.” She added, “Expense mitigation efforts partially offset this decline, but are expected to be unfavorably impacted by the delay of implementation of these efforts, principally in Southern California.”

Martin appeared to be referring to Tribune management’s conflict with Beutner, who had implemented an ambitious local growth strategy and resisted cost-cutting measures ordered by the company’s top execs. Beutner also supported a bid for the LAT by billionaire Eli Broad, which Tribune management rejected out of hand.

Tribune’s firing of Beutner provoked scathing criticism from local civic and business leaders in LA, who called for Tribune to turn the LAT over to local owners, but Tribune is standing firm.

Last week, the board of directors announced that it has no intention of reversing its decision to fire Austin Beutner as publisher of the Los Angeles Times or of selling the newspaper.

The statement read, in part: “"Our California News Group, which includes the Los Angeles Times and the San Diego Union-Tribune, is a cornerstone of our Company’s portfolio and a key component to our success in the future. Tribune Publishing is deeply committed to these world-class institutions, the communities of Southern California and all the other markets in which we operate.”