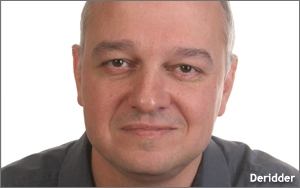 Koenraad Deridder, managing director at Dekoder, has always dreamed of programming television stations. He started in advertising at Universal McCann as a TV buyer and later became head of TV and an account director for clients like Coca-Cola, GM and Interbrew (now ABInbev).

He explains his route into television: “At UM, I one day wrote a critique of the scheduling of the main commercial channel that got a lot of press coverage. After which the president of programming (and celebrity TV presenter) got fired.

"This was, of course, also noticed by the management of the second commercial channel in our market, SBS. They asked me to join the channel as head of research and development with the promise that one day I would get the opportunity to program the channel.”

Here is an excerpt of my interview with Deridder, which covers how programming differs in Europe, what the challenges are in the market, how set-top-box data is being integrated into measurement — and, looking ahead, how the media landscape could change five years from now.

Check out the videos of the full interview here.
Charlene Weisler: How is programming for a European market unique?

Koenraad Deridder: In Europe, local media companies often claim that Europe is different and that this "cultural difference” should be protected. But this argument is mostly used to keep out competition. In my experience, media indeed has to adapt to the local culture and often to the smaller scale. But most business models and management techniques remain valid. I have always found success and enjoyed partnering with American companies.

CW: Tell me about your current projects.

KD: For the Belgian media group Concentra, co-owner of the main newspapers in Belgium, I launched and program the TV channel Acht (Channel 8). Ratings-wise, it quickly became the number-one digital station and the number-three cable station overall. But advertising income was low. In Belgium, cable TV was only marketed as a niche add-on for advertisers — not really as a direct competitor and alternative to broadcast.

CW: How did you overcome that challenge?

KD: With a former colleague, we decided at the end of 2011 to launch the sales house Transfer — not just to sell Acht, but also to create a commercial model for cable. We would bundle the offer of different cable stations and prove that cable makes campaigns more efficient — e.g., by adding reach.

But broadcasters control the access to the ratings measurement in Belgium. They asked that we — a start-up — pay as much as the biggest broadcast channel group for this measurement.

This carried a big financial risk, and we looked for a financial partner. We found FOX International Channels willing to become the majority shareholder in our venture.

CW: What about the integration of set-top-box data in TV measurement?

KD: I am the chairman of Thematics United, an association that is similar to the CAB. It unites Flemish cable channels, Discovery, Disney, Viacom and FOX/Transfer. One of our aims is to change the ratings measurement system, e.g. by integrating set-top-box data. As a first step, we managed to obtain a seat in the technical commission that governs the Belgian ratings measurement.

CW: Looking ahead to the next three to five years, what do you think the media landscape will look like?

KD: I think that digital will disappear as a separate media category, as all media will have gone digital.  Rather nonsensical KPIs like the percentage spent on digital will hopefully be replaced by more valuable ones, like the number of people identified at the individual level, or the products sold in shops as a direct result of a campaign.

Also, in Europe media planning is moving in that direction with the French market leader TF1 launching its One Data offer, combining results in TV, online and in the shops.

Advertising is now about consumer journeys, treating clients not just as consumers but as humans with all kinds of interests. TV is the ideal medium to do that. Because this is exactly what TV programmers have always been doing: making sure that their offer fits with the daily life of the viewer…

A final strong point in TV is that our work flow has been digital for a long time. In Belgium we connected all TV sales houses, media agencies, GFK and Nielsen already in 1997. We exchange ratings data on the spot level and standardized advertiser data. We can easily add enriched profiles and sales data.  And we can also upgrade our ratings analysis software to analyze that bigger data.

In many ways, TV is already more digital than digital.