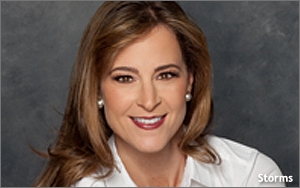 She will also head The NBC Sports Agency.

Storms replaces longtime NBC marketing executive John Miller, who will now be CMO of NBC Olympics, as well the chair of NBCUniversal Marketing Council, the group that coordinates many cross promotion for NBCUniversal TV networks, shows, and films.

Storms comes to NBC after six years at PepsiCo, where she was SVP of global sports marketing for PepsiCo’s entire portfolio, which includes 22 flagship global brands.

Previously, she had been at Turner Broadcasting System for 14 years, culminating as an SVP of Turner Sports Marketing & Programming.

Miller has been CMO of NBC Sports Group since February 2011. In 1999, he co-founded and lead The NBC Agency until 2010, the industry’s first full-service advertising agency.

Before that, for six years between 1993 and 1999, he was EVP of advertising and promotion for NBC. He oversaw the longtime successful on-air NBC marketing franchise campaign “Must See TV.”