Brawny Man Choice: Clean Up The Mess Or Move To Mexico 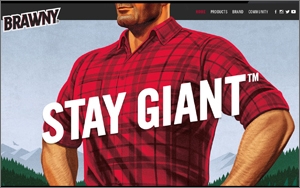 The Brawny Man has been a familiar face encouraging housewives to buy paper towels since 1974. But times change and now the Brawny brand is trying to modernize to appeal to today’s consumer.

Developed by agency Cutwater, the "Stay Giant" campaign relies on humor to move beyond simply selling paper products. The new  Chili spot, for instance, doesn't even show the man cleaning up his mess but rather focuses on his internal voice wondering whether he should run away to Mexico.

The campaign is designed to target and celebrate anyone who has faced a challenge head-on, say Cutwater executives. Today's consumer, they say, doesn't need the Brawny Man to be their savior. In the new spots The Brawny Man is that voice inside the consumers head who helps them to 'Stay Giant' when confronted with adversity.

Here’s a spot about a mess made by a dog killing time at home.

One notable change is the campaign's rejection of traditional advertising tropes for paper towels. Gone are the moms in sparkling clean kitchens smiling happily as they clean up someone else’s mess as if it was the highlight of their day. And today's Brawny Man isn’t coming to the rescue to ‘save’ confused housewives facing cleaning problems they can’t solve on their own. Instead, the Brawny Man is positioned to serve as the voice of reason and encouragement to help people to rise up to a challenge and to not stress over the small stuff, like spilling chili.

The campaign includes TV, out-of-home, digital video and banners, social media, as well as PR outreach. Additionally, the Brawny packaging has been redesigned to feature the new Brawny Man and has a new claim of "More feet in every roll." Brawny.com has also been redesigned to support the "Stay Giant" campaign.

Cutwater began working with Brawny in January 2014. Last year, GP, which is privately owned by Koch Industries, added Cutwater and three other agencies  - Droga5, Interpublic's Deutsch LA and Martin Agency - to its roster of shops that include DDB and Eric Mower to represent its consumer product brands.