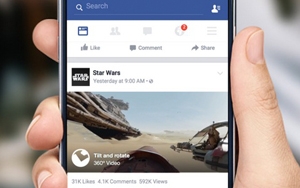 Trying to whet consumer appetites for virtual environments -- and increase engagement in the process -- Facebook is officially rolling out 360-degree “spherical” videos in News Feed.

The social giant has also enlisted some big publishers and media brands to start pumping out 360-degree videos. They include Discovery, GoPro, NBC’s Saturday Night Live, VICE, LeBron James & Uninterrupted, and, with the help of Disney and Lucasfilm, Star Wars.

The professionals' videos will “help show the range of possibilities with this new medium,” Maher Saba, engineering director for video at Facebook, explains in a new blog post.

To create the videos, a special set of two-dozen or so cameras are arranged in spherical form. As a result, when the resulting video is streamed, users can choose what angle they want to see it from. “On the Web you can do this by dragging around the video with your cursor, and on mobile devices you do it by dragging with your finger -- or even just by turning your device,” said Saba.

Users should soon be able to hold up their phones, and the 360 video will follow their movement as they turn. At some point in the not-too-distant future, 360 videos will let users virtually immerse themselves in various environments and events from a friend’s trip to the Grand Canyon to a live news broadcast from Iraq.

The greatest potential for the new videos will come when Facebook launches its Oculus Rift virtual reality headset sometime next year.