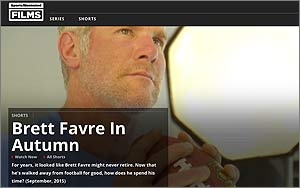 The series, which will be hosted on its own dedicated digital platform, will offer SI-branded content for delivery via digital video, traditional TV, and “over-the-top” Internet-connected TV.

Sports Illustrated Films debuts with two original productions: “Brett Favre: Life After the Game,” a profile of the NFL great, and “The Rise and Fall of the Danbury Trashers,” about the unlikely rise and fall of a minor league hockey team, based on a story published in SI last year.

Time Inc. has also struck production agreements with Mandalay Sports Media and Velocity, which will create a range of content for Sports Illustrated Films, carrying the SI brand.

The planned productions include “Patrick and ‘Zo,” produced by Mandalay, documenting the friendship and rivalry between NBA greats Patrick Ewing and Alonzo Mourning, and a series produced by Velcity on the “100 Greatest Moments in Sports.”

Time Inc. Video Senior Vice President J.R. McCabe explained: “We see amazing potential for Sports Illustrated-branded programming both domestically and internationally, and we are going to pursue those opportunities very aggressively.” According to McCabe, the SI video push will be a model for the publisher’s other brands.

As noted, Sports Illustrated Films is part of a larger video initiative from Time Inc. Other new offerings including “SI Now Powered by Ford,” a daily live talk show.

SI is also working to expand its coverage of non-professional sports with new launches and acquisitions. Last month, it launched a new site called Campus Rush, dedicated to the world of college football, featuring reporting from 66 student journalists across the U.S.

Earlier this year, Time Inc. also acquired FanSided, a network of over 300 Web sites devoted to teams, as well as three companies that together form SI Play, a new division devoted to youth sports. SI Play serves youth and amateur sports enthusiasts with online tools for player registration, scheduling, communication and score keeping, among other functions.