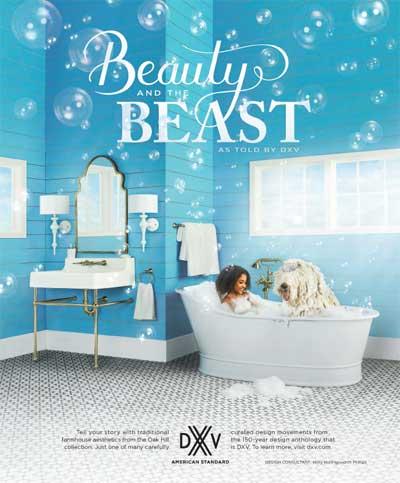 In order to differentiate itself from these clichéd concepts, DXV by American Standard and 22squared are introducing the “As Told By DXV” campaign, which reimagines classic works of literature -- like Alice’s Adventures in Wonderland, Beauty and the Beast, and Strange Case of Dr. Jekyll & Mr. Hyde -- to demonstrate to affluent homeowners and designers the brand's ability to create a personal story for their kitchens and bathrooms.

In the “Strange Case of Dr. Jekyll & Mr. Hyde” ad, for instance, the visual is one of a man with an image of a looming and intimidating face tattoo sprawled across his back. However, in looking at the mirror and his surroundings, one notices his other side is otherwise elegant and tasteful -- playing off the two-sided character of Dr. Jekyll and Mr. Hyde. In the “Beauty and the Beast” ad, a young girl is taking a sudsy bath with her “beast”, her pet dog, in a modern twist to the classic tale. Both ads feature the tagline designed to encourage people to “tell your story” with DXV.

While it may not necessarily be a quick jump for people to connect DXV with classic literature, agency executives say the brand's backstory was perfectly suited for this creative reinterpretation. “DXV is a collection of the best design movements from the past century and half," says Curt Mueller, group creative director, 22squared.

"When looking at how people design their homes, we realized that they used design to tell a story. So our team took classic literature and reimagined these stories using DXV products. The result was print that stood out from the category and encouraged people to tell stories in their own homes using timeless DXV pieces.”