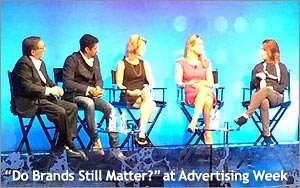 Brands are under threat. As Kanye West says: "Brands need to help people achieve things rather than simply barking at them."

Brands can no longer rely on their logos and classic marketing tricks that are more flash than substance in today's competitive marketplace.

Fret not -- according to stats cited at Monday’s Advertising Week session “Do Brands Still Matter?” more than half of Americans (57%) and 88% of Chinese still think brands matter.

Now, Ogilvy is identifying key concepts after querying 2,000 professionals ages 18-64 in four countries -- U.S., UK, Mexico and China -- to understand what they like and dislike about brands.

Importantly, advertisements "need to be doing something rather than saying something." People are more likely to say they want to see ads that provide enjoyment (64%) or information (61%) rather than emit coolness (37%).

In fact, six of the top 10 factors that people say matter in advertisements help them enjoy life or provide guidance.

UPS has pivoted away from merely showcasing propaganda about its delivery prowess to build goodwill about the meaning behind its packages.

During the past holiday season, UPS introduced the Share Your Wish initiative that granted people's wishes, including delivering books to Africa and helping a cute 4-year-old boy realize his dream of becoming a UPS driver. The company filmed these experiences to turn into TV spots. "There's no line between how to service and how to market to them," says Mitchell.

Likewise, Huggies needs to sell diapers, but are selling fewer units with declining birth rates. As a result, the diaper brand decided to launch the Baby Making Radio Station to encourage couples to make some babies that in nine months will then benefit their bottom line. The station launched on Pandora-branded on Valentine's Day with classic romantic songs from Michael Bolton, Marvin Gaye, and Boyz II Men. The station garnered more than 20,000 hours of listening within one month, with the average person listening for 23 minutes.

Brands need to readjust their priorities, since most currently engage in initiatives that don't resonate with consumers. It is more important to spend money on call centers than NFL packages. Three in four people (75%) say exceptional customer service matters, compared to only 26% who think it is important that brands sponsor sports events, 22% engage in guerrilla-type marketing tactics, and 19% align with celebrities.