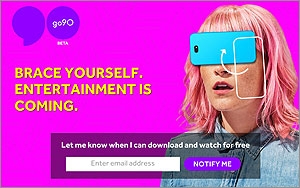 Verizon is making a huge bet on go90, an ad-supported mobile entertainment app that will offer a wide variety of video content, including a mix of live events, prime-time TV, best-of-the-Web and original series across Comedy, Music, Gaming, Lifestyle, Sports, News and Entertainment.

The app serves as a toe in the water for Verizon to compete with other online streaming and content providers like Amazon, Hulu, and Netflix.

As a part of its push to develop original content for the service, go90 and studio New Form Digital announced last week that they will be developing six scripted series, each of which has a 12-episode series order. Five of the series have been announced:

The Fourth Door: A fantasy adventure about a woman who wakes up in the embattled way-station between this life and the next; populated by mysterious and dangerous creatures who force her to face the past, present and future to save the man she loves. Created and directed by Tony E. Valenzuela.

#DoOver (working title): What if you could repeat the most important day of your life until you perfected it? Allison Lee gets more than she wished for when she's stuck repeating her epic 25th birthday bash which goes up in flames, over and over again. Created and written by Kathleen Grace and Shawn Dempewolff-Barrett.

Miss Earth (working title): An intergalactic sci-fi comedy following Victoria Young, a pageant queen on Earth, who takes the place of her battle-tested twin sister in a competition with all of humanity at stake. Created by and starring Anna Akana.

Cold (working title): A dramatic crime series about a teenage girl who seeks out her birth parents only to find that her separation from them occurred due to significant tragedy. In her efforts to uncover what really happened, she explores the town where she would have grown up, finding that although seemingly quaint - it is a place with many secrets. Created and directed by Emily Diana Ruth.

The New York Post reports that the app has already received $80 million in backing.

Go90 will host content from about 100 partners, including Vice News, Discovery Communications, Food Network owner Scripps and youth-focused AwesomenessTV, as well as other online video offerings.

The app will not be identified as a Verizon product to avoid any undue drag that the carrier’s name might put on the service.