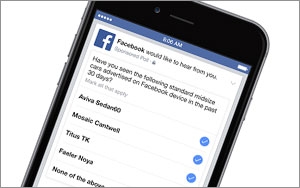 For starters, the social giant just introduced a way for advertisers to plan, buy and measure its video ads using total rating points (TRP) -- a metric that should be very familiar to any TV buyers.

With the offering, Facebook is encouraging marketers to plan campaigns across TV and its own properties -- including Instagram -- with a total TRP target in mind, then buying a share of those TRPs directly with Facebook.

With the offering, Facebook is virtually guaranteeing positive results.

In tests, the company said advertisers that combined their TV and Facebook efforts saw a 19% increase in targeted reach versus TV alone. When millennials were the target audience, the incremental reach increased to 37%, according to research conducted by Nielsen on behalf of Facebook.

Dentsu Aegis Network was the first agency to test the TRP buying tool stateside and in the UK.

It was the product’s mobile potential that initially attracted Nigel Morris, CEO of Dentsu Aegis Network Americas & EMEA. “Mobile video is a key point of disruption and the way we are innovating with Facebook to test and launch TRP Buying in the market is key to being able to pivot at speed,” according to Morris.

Facebook on Sunday also debuted brand awareness optimization bidding, which is designed to help advertisers find those audiences most likely to recall their ads.

The initiative builds on the insight that the longer a consumer spends with an ad, the more likely they are to remember what they’ve seen.

Sometime next month, brand awareness optimization will be available when buying in the Ads auction, as well as through the Reach and Frequency tool in Power Editor.

Separately, Facebook is partnering with Millward Brown Digital on brand lift insights for Facebook and Instagram, which should help advertisers conduct mobile polling on both platforms. Facebook first debuted mobile polling earlier this year in partnership with Nielsen.

On Instagram and its flagship property, Facebook is also adding video to its carousel ad format. Video in the Carousel format will begin rolling out this week in Power Editor, and should soon expand to the Ads Create Tool.

More broadly, Facebook said it has seen 25% growth in the number of active advertisers on Facebook since February. All told, the company currently boasts about 2.5 million ad partners.