Noah's Arc: From Bad To Worse In 'Daily Show' Debut 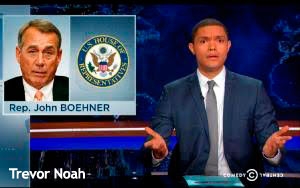 The new "Daily Show” ended with an old bit -- the show's customary “Moment of Zen” -- but it was a “Moment of Cringe” that was more startling.

It came about two-thirds into Monday night’s show, which marked the debut of Trevor Noah, 31, as the new host replacing Jon Stewart.

Noah’s first guest, comedian Kevin Hart, had come on stage happily bearing a gift box wrapped in a ribbon that he presented to Noah, who had a look on his face as if he had just caught the whiff of a bad odor. He then proceeded to undo the ribbon and open the box, which contained a handful of new, colorful silk ties.

It wasn’t a gag -- just a thoughtful gift. Hart chatted amiably about the gift, explaining that he thought some new ties would come in handy now that Noah has a job requiring that he wear a different one every night. While Hart talked, Noah looked disdainfully down at the tangle of ties and tissue paper in front of him, took hold of the box and shoved it beneath his desk and out of sight.

He never once said thank you. On the contrary, he acted as if this gift was an unwelcome imposition, and he couldn’t hide his displeasure. As a result, he came across as ill-mannered, charmless and easily rattled.

Hart took notice. “I expected a bigger reaction … whatever,” said Hart, who managed to remain lighthearted nonetheless. “I thought you would give me a lot more than what you gave. It’s OK …”

Noah then went on to conduct an “interview” that consisted mostly of the host gushing over his celebrity guest, praising him to high heaven in the manner of a starstruck amateur.

“I appreciate you,” Noah said to Hart when the brief segment ended. “I appreciate what you stand for,” he said, although what Hart “stands for” was not clear. Let the record show that Noah thanked Hart for coming on the show. But he never did get around to thanking Hart for the new ties.

Noah started his first show self-consciously referring to himself, particularly his origins. He was born in 1984 in Johannesburg, South Africa. His mother is African and his father Swiss. According to Noah’s biography on Wikipedia, his parents’ mixed-race relationship was illegal under South Africa’s apartheid laws and his father wound up departing for Switzerland and his mother spent time in jail. Noah grew up in the township of Soweto.

“I’m not gonna lie,” Noah said as he opened his first “Daily Show” Monday night. “This is surreal for me. Growing up in the dusty streets of South Africa, I never dreamed that I would one day have, well, two things really -- an indoor toilet and a job as host of ‘The Daily Show’!”

He then did a monologue in which he explained that Comedy Central could find no Americans to take up the host’s job. “And once again a job that Americans rejected is now being done by an immigrant!” Noah said.

If he couldn’t figure out a way to thank Hart for his gift later in the show, Noah did make a point of thanking viewers for tuning in. “Thank you for joining us as we continue the war on bull----!” he said tastelessly.

Noah then went on to make fun of the Pope and John Boehner. Noah and his writers lampooned the media’s breathless coverage of the recent papal visit and, in the process, managed to make a joke that speculated on the size of the pontiff's endowment.

Later, he did a joke about AIDS and another one about Whitney Houston’s death from a drug overdose.

Questioning or criticizing these jokes on the basis of taste is a lost cause, since many comedians traffic in material like this -- and some of them are savagely funny.

But with Noah, you got the impression he was trying too hard to jolt his audience into noticing that he had arrived. The same might be said of the high-decibel applause and near-maniacal laughter that accompanied every thing he said and did. You had the feeling the audience had been warmed up before the show to fly falsely into a delirious frenzy every time Noah opened his mouth, regardless of what came out of it.

It’s possible that Noah was just experiencing opening-night jitters, and that he’ll become more comfortable in the host’s role in the weeks to come. However, on this particular night, he choked. His “Daily Show” on Night One didn’t seem quite like “The Daily Show” at all, but more like a minor league version of it.