The Key To Fantasy (Football) 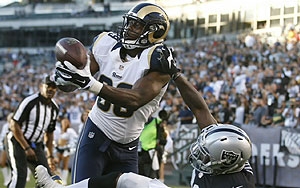 It's a lifestyle. It has its rituals, rewards and punishments. Its stars and icons. It’s a church where adherents are so passionately devoted they will answer the call no matter what they're doing or where. They have a communal sense that makes it possible for schlubs to rub shoulders with the likes of Jay Z. No, it's not Scientology. It's fantasy football.

And it's really popular. At an Advertising Week discussion on Monday, Matthew Berry, senior fantasy analyst at ESPN, cited Ipsos stats that there are some 56 million players in North America this year alone, of which 46% are adults; 80% have some college; 47% make $75,000 or more every year. "We cater to them because while about 10% of our audience on digital play fantasy, they consume 50% of our content," said Berry, adding that the average sports fan spends a little over 6 hours per week on ESPN, while the average fantasy player spends about 18 hours per week. "People are into it,” he said, “but in a way that encompasses their entire life."

He went on to say they are also more brand loyal and more likely to buy beer, fast food, athletic shoes, smartphones, and video games. "Sports fans are early adopters more technically aware; they are more brand aware; and more brand savvy." But there are dangers for brands hoping to exist in that space. You have to understand the religion and speak the language.

Berry offered an example of an Xbox campaign a couple of years back that wanted to introduce a fantasy overlay, where you insert your fantasy players. A commercial had a fantasy football fan interviewing real NFL stars for his team, and asking each one "What have you done for me?" At one point, he interviews Drew Brees, noting that he had only played in one Super Bowl. Berry said that was a mistake: fantasy players don't care how many Super Bowl games a player participated in.

"They care more about yards per year," he said. "You need to speak the language and provide value to the fantasy owner. It can be as simple as humor, and ‘we get what you are going through.’ It has to provide some value."

Berry has worked on helping brands like restaurant chain Dave and Buster's do programs for fantasy football fans. And the ideas hold for any hospitality or restaurant brand: Give them an incentive to do things like hold a draft there. "They offer game-day specials, and have found that every year sales are up double digits."

ESPN partnered with budget hotel chain Choice Hotels, which markets itself as a place to stop on the way to your destination. "We did a campaign around fantasy players on their way to draft." One winner got to take his entire league to ESPN, where Berry helped them in that process.