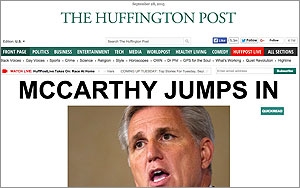 Two of the biggest online publishers are unveiling major changes in conjunction with Advertising Week in New York City. The Huffington Post is previewing a comprehensive redesign for its Web site and app, while BuzzFeed is set to debut its Android app.

The HuffPo redesign, the first in the publication’s 10-year history, is the product of a collaboration with digital design agency Code and Theory. The redesign preserves some of the site’s most identifiable features, including its iconic green masthead and eye-catching headline image, but presents a new, responsive format that is easier to navigate.

HuffPo previously rolled out a redesigned mobile Web site, also created in collaboration with Code and Theory, in May of this year. The pub also revealed that is working with IBM’s Watson to expand its data and analytics capabilities, giving it a more precise view of audience interests and content trends.

Separately, BuzzFeed followed up its earlier launch of an iOS app in June with the unveiling of its new BuzzFeed News Android app, available on Google Play. The Android app is optimized for speed, allowing quick access without exorbitant demands on data, and includes a selection of stories from around the world, hand picked by BuzzFeed’s editors.

Both publishers have been introducing new products and partnerships at a steady clip in recent months.

Last week, HuffPo announced a partnership with Bringhub, an e-commerce platform that allows users to buy products from multiple retailers via a single checkout. The partnership will incorporate “buy buttons” powered by Bringhub, which debuted with placements in a native advertising campaign for Dockers on HuffPo. HuffPo plans to bring the buy buttons to other site content as well.

For its part, BuzzFeed struck an innovative deal with WPP’s GroupM, giving the agency and its corporate siblings wide access to BuzzFeed’s creative and data assets.