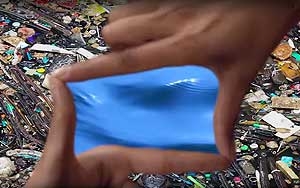 Sony Pictures Television is putting its worldwide global reach and services to use to help create a more environmentally friendly world.

The company this week launched “Picture This,” a global effort to engage its viewers on environmental issues, with a focus on local initiatives. The overall theme, as well as the initiatives highlighted, came from suggestions from the company’s global markets, says Paula Askanas, executive vice president of communications for Sony Pictures Television.

“In order to do this in a global way, it’s not as successful or impactful of you push it down from above,” Askanas tells Marketing Daily. “It was generated by the local channels in the local markets.”

A video explaining the concept intercuts shots of pristine scenery and hopeful young people with polluting factories, fish dying in a river and huge landfills. “When you picture the future, what do you see?” says a voiceover. “Is everything getting better? Or worse?” Images then show people making rectangles with their fingers as a framing device to introduce the idea of “Picture This.” “Imagine a world where people and nature thrive,” continues the voice over, as the framing device turns elements of the environmental destruction (dirty beaches, landfills, etc.) into more welcoming. “Where we use energy, resources and technology responsibly … We can picture a better world. And together, we can make it a reality.”

In the U.S., Sony’s “Picture This” effort focuses on the conservation of the country’s National Parks. Using the same finger-framing device to put color imagery into black-and-white photos of the National Parks, the spot speaks to improving the country’s 84 million acres of protected wilderness in the U.S. “It’s up to us to preserve them,” says a voiceover. “Let’s do anything we can to make a difference.” It encourages people to get involved and visit the company’s dedicated site, sptpicturethis.com, for more information. The PSAs will run on Sony TV networks such as getTV, Sony Movie Channel and the streaming entity Crackle.

Other markets will focus on similar environmental issues important in their areas. In Russia, the emphasis will be on recycling, while Asian markets will raise awareness about eliminating plastic shopping bags. South Africa will focus on the rhino, and Latin America will examine urban gardening.

“We’re really trying to make a difference and talk about the environment in different ways,” Askanas says. She’s hoping the initiative will run for a full year, and then possibly be expanded. “I think there’s potential to expand it in a bunch of different ways,” she says.