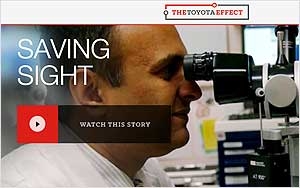 Toyota's new corporate campaign, “Toyota Effect,” doesn't offer a look at Toyota’s products — you know, cars and trucks — but how they're made. It’s really about the Toyota Production System, otherwise known as The Toyota Way, which includes tenets like “Kaizen,” or continuous improvement, and just-in-time supply and production. But the campaign doesn't go to Japan and wander around Toyota City production lines with a GoPro; it brings auteurs to U.S. non-profits and businesses that are using TPS to apply the principle to their own day-to-day operations.

The effort, involving a partnership with digital film studio Cinelan and digital agency 360i, centers on an initial set of three independent short films, which debuted at the New York Film Festival Convergence just before Advertising Week began this week. The films, by Kief Davidson, Steve James and Ross Kauffman, were shown along with a panel moderated by MediaPost columnist Bob Garfield with Marjorie Schussel, director of integrated brand communications at Toyota, and Davidson and  Kauffman.

Davidson's film was about Toyota's involvement with the Harbor-UCLA Hospital’s eye clinic, patients of which belong to an underserved community. The clinic is, as one might expect, stretched thin and in need of efficiency. The film shows how Toyota helped by focusing on a diabetic patient hoping for ophthalmic surgery to save her eyesight.

Kauffman's film shows how Toyota's process benefits the St. Bernard Project, whose mission is to help rebuild homes for people who have theirs in natural disasters, such as hurricane Katrina. The Toyota effect in this case has allowed the organization to go from New Orleans to other disaster areas around the country.

And James’ film is about Chicago-based ACE Metal Crafts, a U.S. manufacturing company that uses the process to stay competitive with offshore (China) products. After the New York Film Festival Convergence premier, they were launched on a Toyota Effect microsite, with support through a digital media, and influencer marketing plan that drives consumers to online hub.

Schussel tells Marketing Daily that the integrated campaign around the films also includes in-cinema preroll. “We have a buy with independent film theaters across the country, where we are running on pre-roll, and we are running [online] banners that will drive people to the Toyota Effect site. It's all digital,” she says. “We wanted to tell the company story in a way that is surprising. People know us only for our cars and trucks, of course, but we have been lending our production know-how to organizations and companies for a couple of decades now.” She says those organizations who are using Toyota and its system “are the best advocates for the brand.”

The film-makers were allowed to shoot as they saw fit, without interference from Toyota, per Schussel. “That is a little scary from our perspective, because we do give up control to let them tell the story in their own way, but in the end it is so much more believable.” The company, she adds, is using different ways to get people to engage with the films via social, including working with influencers, “who can not only talk about the films, but share them with followers. We know people are consuming video in native platforms like Facebook and Twitter, so we are taking advantage of those to let them.”