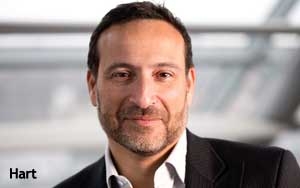 Andy Hart has been named senior vice president and chief revenue officer for Hearst Magazines International, the overseas arm of the privately held American publisher. The appointment is effective October 1, and Hart will be based in London.

Hart previously served as vice president of European advertising and online business at Microsoft, part of the tech company’s global executive leadership. Before that, he was CEO of the digital division of the Daily Mail and General Trust plc, publisher of the British broadsheet and its associated digital properties.

He also served as CEO of drinks maker Diageo’s Translucis, a network of digital displays in nightlife venues.

Announcing the appointment, HMI president and CEO Duncan Edwards stated: “Andy has broad experience in print and digital sales, deep relationships with global clients and agencies and senior operating experience in a matrixed, international organization. He said his "formidable skills and knowledge will be an asset to Hearst.”

Currently, HMI’s publishing network reaches 80 countries around the world and consists of about 300 print magazines and 200 Web sites, which attract around 200 million unique visitors per month, according to the company.

Hearst has been busy on the home front, as well. Last week, the publisher announced it was investing $21 million in Complex Media in exchange for a minority stake in the millennial-focused publisher. Hearst has also taken stakes in Vice Media and BuzzFeed, also millennial-skewing media companies.
hearst magazines, management, uk
Next story loading