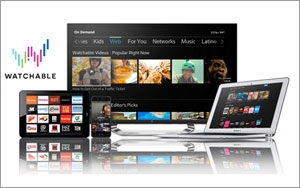 Media sources have been positioning Watchable as a YouTube competitor. Many digital video providers that Watchable has signed up are also on Google's video platform.

Unlike Comcast’s other efforts around bigger traditional media brands, the company says: "Many of our Watchable partners have not traditionally had distribution on the TV, and we can give them a path to reach new audiences and further monetize their content on the biggest screen in the home.”

Financial terms between Comcast and those video partners were not disclosed.