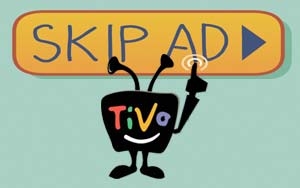 Looking to spruce up its DVR product line -- and tiptoeing around some ad-skipping controversy -- TiVo is adding a feature to a new unit allowing a user to skip an entire commercial break.

With one press of the button called SkipMode, the new TiVo Bolt will allow users to skip an entire commercial break -- a feature that will work with 20 over-the-air cable channels including major broadcast networks, during prime-time hours.

TiVo hopes the new feature will avoid the legal issues that, for example, Dish Network ran into for its Hopper DVR and AutoHop function a few years ago. AutoHop allows users to skip through an entire prime-time week’s worth of commercials among the four major networks.

After many legal threats, many networks settled with Dish as part of their carriage deal agreements. For example, the AutoHop function is blocked for the first seven days after a program has been broadcast on a CBS station; and after three days ABC station.

TiVo says the difference, is that unlike Dish it is not “auto-eliminating” the commercials, according to one report.

TiVo says the TiVo Bolt will be 4K compatible, the first DVR unit of its kind. TiVo started selling the new TiVo Bolt on Tuesday at online and starting October 4 at Best Buy.