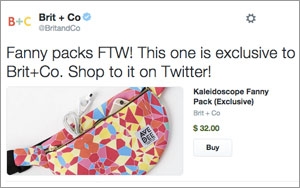 Twitter is expanding its “Buy Now” button initiative in partnership with Bigcommerce, Demandware, Shopify, and other ecommerce partners.

The goal is to “make it as easy as possible for businesses to connect directly with, and sell to, customers on Twitter,” Nathan Hubbard, VP of commerce at Twitter, explains in a new blog post.

Twitter on Wednesday began rolling out to a wider group of platforms and partners, although the effort is still limited to U.S. merchants.

As part of its broader ecommerce ambitions, Twitter began rolling out a “buy” button in tweets, late last year. It also recently began testing some new ways to help users discover products within its network.

Dedicated pages, for instance, feature images and videos about products, alongside information such as a description, price and an option to buy, book, or visit a brand’s Web site for more information.

Twitter also recently began inviting advertisers to create credit-card-connected promotions, and share them with users directly in their timelines. With their credit cards, users can redeem the new “Twitter Offers” in stores without the need for a coupon or numerical code.

Last year, U.S. ecommerce was expected to reach $304.1 billion -- nearly 20% of which will occur via mobile devices -- according to eMarketer.

Whether a significant share of consumers will shop via social channels remains to be seen. One recent study from DigitasLBi found that 20% of U.S. consumers would consider purchasing via social, yet a separate report from Capgemini found that shoppers are less interested in social media than they were just two years ago.