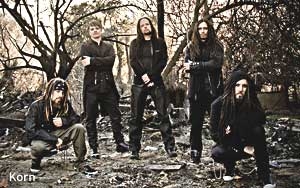 Fieldy Arvizu, Korn's bass player, marvels at the intimate connection smartphones create between the band and the fans.

This month, for the first time, the band kicks off a mobile campaign to coincide with its national tour, engaging fans through free, exclusive content during the tour, such as videos, photos and backstage sneak peeks.

The campaign is made possible through CallFire's text messaging platform, and Mobilewave, a mobile marketing and loyalty company.

The companies began piloting the campaign in early summer 2015 with Arvizu's fan base before bringing the idea to the band.

Korn began introducing its fans to the Web in the early 1990s, but Arvizu, impressed by technology, wants to continually try new things. "It blows me away that the Starbucks app lets you pay with your phone by pressing the pay button and scanning the barcode," Arvizu says, admitting he's not techie, but they make it simple. "They're the biggest of the biggest company, and it takes three clicks to make a purchase."

Arvizu wants to bring that simplicity and innovation to Korn's mobile campaign, similar to the way American Express bypasses the option of connecting with consumers through text messages, bringing information like account balances to the locked home screen on the phone.

To receive free content enabled by CallFire's technology during the Korn tour, fans text "Rock" to 606060 to join Arvizu's text channel and unlock the exclusive content during Korn's tour. Through videos and photos, Arvizu will send fans behind-the-scenes looks backstage at a Korn concert, how the band prepares for a show and what the bassist does on a day off while touring, according to Brook Temple, SVP partnerships at CallFire.

Temple says once the tour concludes the band will have a "sizable" database of fan who can continue to receive messages and special offers, perhaps get a sneak peak at tours or hear upcoming songs. It also provides opportunities for cross-channel campaigns on social and search.

As part of the campaign, Scott Tanner, Mobilewave president and co-founder, has been testing live interaction for more than eight months. "It's something we may do on Oct. 30 in Oakland, Calif., during the final night of the Korn tour," he says.

Mobilewave has been working with Korn for more than 15 years, but it also works with sports and other types of entertainment brands. Tanner's in talks with the Dallas Cowboys to bring more in-depth behind-the-scenes content to fans, so they can get a glimpse before players take the field for a game.