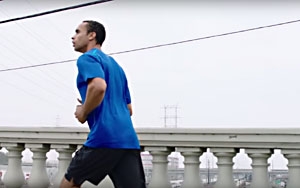 Darn you, New York City Marathon. Just when we’d like to believe there are no new motivational running tales, you find some new ways to inspire us—including the five finalists Foot Locker is now asking viewers to vote on the best.

The “Real Lives. Real Runners” contest is a partnership between Foot Locker and ASICS, and a follow-up to last year’s “All Runners Welcome” effort. Five films have been selected, and you can count on 26.2 miles of sniffles: It includes an ex-con who took up running while still in prison, one young man inspired by his late mother, another out to beat the running streak of his late father, a Stage IV melanoma patient and an Army veteran.

Based on number of You Tube views through Oct. 15, the creators of the top three spots get to fly to New York City for a Foot Locker and ASICS America screening event, with the final winner being selected a panel of judges.

Foot Locker says that winning spot is scheduled to air on the national TV broadcast of the 2015 TCS New York City Marathon, scheduled for Nov. 1.

The filmmaker who wins also gets a cash prize from MOFILM, plus an all-expenses paid trip to Las Vegas for the annual MOFILM Awards.

For ASICS, the Japanese company that stands for “Anima Sana In Corpore Sano,” or "A Sound Mind in a Sound Body,"  the films reinforce its commitment to the many reasons people take to the streets. "The videos are incredibly exhilarating and truly speak to the diversity of what running means to people from all walks of life,” says Shannon Scott, ASICS America senior director of marketing, in the announcement.