Dell To Acquire EMC For $67B, Along With 'Crown Jewels' VMware 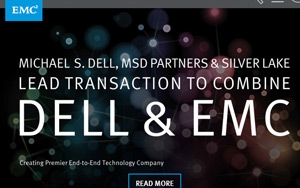 The computer maker Dell and its owners, founder Michael S. Dell, MSD Partners and Silver Lake confirmed Monday the acquisition of EMC in a deal worth about $67 billion, making it the biggest tech deal ever.

Under the terms of the agreement, EMC shareholders receive $24.05 per share in cash, in addition to tracking stock linked to a portion of EMC's economic interest in the VMware business, which makes virtualization software.

The EMC Board of Directors approved the merger agreement and intends to recommend that stockholders of EMC approve the agreement.

EMC provides data-center storage for large technology companies. The deal benefits Dell by raising its position in data centers, as EMC holds nearly twice the shares Dell has in the storage market. Glenn O'Donnell, research director at Forrester Research, says it strengthens Dell's position in weak areas where EMC has muscle, such as cloud storage.

Dell has been pigeonholed as a PC vendor, but it wants to be known as much more. The deal now gives Dell -- one of the largest providers of enterprise computing products and services in storage -- the "crown jewels," EMC's VMware, to build a new reputation, O'Donnell says.

VMware would continue operating as a publicly traded company, providing customers with software-defined data-center technology, together with its cloud, mobile and desktop offerings. Today, EMC owns about 81% of the stock.

O'Donnell says to pull off this deal Dell will likely need to take more of the stock to the open market to raise cash. "That's tricky because how do you main control while selling it?" he says. "It's a delicate dance. If they spin off 49% total it leaves more for the open market to buy."

Dell’s headquarters will remain in Round Rock, Texas, just outside of Austin, and the headquarters of the combined enterprise systems business will be located in Hopkinton, Mass.