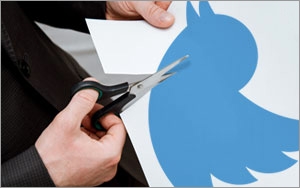 Confirming a week of rumors, Twitter on Tuesday announced plans to cut up to 8% of its workforce, or as many as 336 staffers.

The news comes on the heels of co-founder Jack Dorsey’s return as CEO, alongside calls from investors to streamline the company’s offerings.

“We are moving forward with a restructuring of our workforce so we can put our company on a stronger path to grow,” Dorsey explained in a letter to employees.

“Product and engineering are going to make the most significant structural changes to reflect our plan ahead,” Dorsey said. “We feel strongly that engineering will move much faster with a smaller and nimbler team, while remaining the biggest percentage of our workforce.”

Taking aim at Twitter’s reputation as a laggard when it comes to product development, Dorsey promised that his team is “working around the clock to produce streamlined road map for Twitter, Vine and Periscope.”

Furthermore, Dorsey said the company’s core focus is on “experiences which will have the greatest impact.”

Formerly named Project Lightning, Moments is squarely aimed at the millions of consumers who have yet to embrace Twitter in its current -- and what many call confusing -- form.

Beyond its engineering teams, Dorsey said the rest of Twitter’s organization was being streamlined.

Twitter on Tuesday also assured investors that third-quarter revenue and adjusted profit would meet or exceed earlier forecasts. The company previously said it expected ranges of $545 million to $560 million and $110 million to $115 million, respectively. Third-quarter numbers have yet to be reported.

Twitter had around 2,000 employees when it went public in mid-2013. By last quarter, it had more than doubled that number to around 4,100 positions.