While pundits weigh in on last night’s prime-time politicking, there is no debating which candidates have been winning the Presidential web engagement race. Utilizing an empirical measure of attention -- what people actually look at -- Bernie Sanders’ official campaign site appears to be the big winner in the Web publishing race.

While Hillary Clinton’s site indexes highest among Democrats, and Ted Cruz’s dominates among Republicans, Sanders’ has been best at engaging the attention of Independent voters. At least that’s how a sample of voters ranked those candidates' sites after having their eyes tracked by advertising and content effectiveness research firm Sticky.

Sticky, which utilizes state-of-the-art eye-tracking technology to measure the fixation of people’s eyes on screens can’t say exactly why people look -- or don’t look -- at each of the candidate’s sites, or even what they were actually thinking and feeling while doing so, but the analysis shows that the eyes of users visiting the sites generally fixated on specific areas of the candidates’ screens, especially their photos, their “call-to-action,” and their names. Except one.

At the time Sticky analyzed Clinton’s Web site, her name wasn’t even present on her site’s home page.

Jeff Bander, president of Sticky, says it was unclear why Clinton’s site team omitted her name, or whether the way her site or other candidate’s sites were designed had a positive or negative effect on voters -- just that they fixated on very specific areas of those screens.

But the self-reported responses indicate that whatever was present on those screens generally followed partisan presumptions, with the exception of Sanders’ strength among Independent voters.

Every user visiting Sanders’ site fixated on his face, and a high percentage on his site’s navigation elements. Interestingly, two candidates -- the GOP’s Carly Fiorina and Marco Rubio -- had no navigation on their home pages.

In terms of other critical areas of fixation, GOP Ted Cruz attracted the most gazes to vital calls to action to “join” and “donate.”

Jeb Bush tied with Sanders with 100% of users gazing at his face. 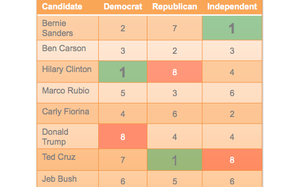 While larger-than-life GOP candidate Donald Trump only performed average in terms of actual eye contact, a survey of site visitors conducted after the test found visits to Trump’s Web site had the greatest positive effect influencing Republican voters, whereas Clinton and Sanders were essentially tied in their impact among Democratic voters. Among Independents, Sanders’ site generated the greatest lift by a wide margin.

The reason I’m posting this in RTBlog is that Sticky’s underlying technology is about a real-time experience -- people actually looking at a media screen -- and because Bander offered to use Sticky’s technology to help us analyze and report on various media screen phenomenon, including political media. We are looking at using it to test candidates’ TV ads, online videos and other content. If there’s any way you think we should use it, please let me know joe@mediapost.com. 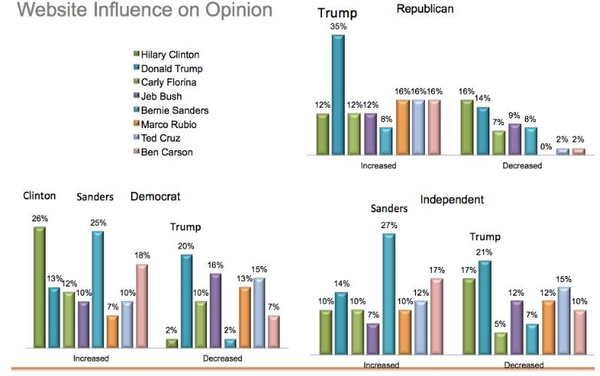