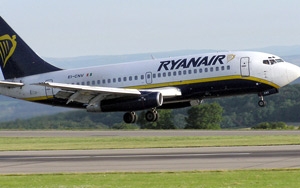 Ryanair wants Google to stop companies from running misleading paid-search advertisements after some customers who clicked through a series of deceptive ads landing on a non-Ryanair Web site to book their flight.

Known as one of Europe's major airlines, Ryanair says screenscraper Web sites such as eDreams have been buying Google advertising to have their Web sites rank above the official Ryanair Web site on Google searches, confusing potential and existing customers. These ads appear in Europe and the United States.

Some believe it's a trademark issue when the airline's name appears in the search ad and URL without the permission of the brand. As outlined in Google's advertising policies, trademarked term in a URL may not necessarily constitute trademark use, such as in the case of post-domain paths or subdomains. Google permits terms to be included within the visible URL so long as they are relevant to the contents of the ad.

Ryanair CMO Kenny Jacobs says many of these masked sites fail to provide -- or refuse to pass on -- information to customers and Ryanair regarding issues such as flight changes, Web check-in, special needs assistance and contact details, resulting in missed flights and repeated problems for Ryanair customers.

Ryanair also wants Google to prevent other Web sites from using its subdomain to sell airline tickets on its behalf. Jacobs explains in a press release that generally the airline doesn't have a problem with Google advertising, but adds that it is "unfair" that Google at times will allow companies to mislead customers.

"Customers end up paying more for their flights, thinking they've bought Ryanair flights with Ryanair, and often their contact details aren't passed on, meaning they can’t be contacted if their flight changes, and they also have trouble checking-in online," Jacobs says. "This is a particular problem for customers in the U.K. and Ireland."

Ironically, the video on Ryanair's Web site bashing eDreams cannot be viewed from the United States -- but go to google.com in the U.S. and search on "rynair" to view the discrepancies in ads. Searching on American Airlines, Southwest Airlines or Delta in the U.S. does not return the same type of ad from eDreams.

It turns out this is a legal dispute between Ryanair and eDreams. Court of Hamburg recently ruled that eDreams has been using an unlawful subdomain and was misleading customers into thinking that it had an official partnership with Ryanair.

Now Ryanair wants Google to step up and monitor the ads more closely.