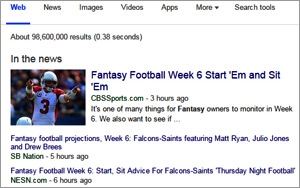 It may seem like fantasy football took over the television airwaves in recent months, with one report estimating TV commercials airing on average once every 90 seconds in 2015. While the two leading fantasy football players — DraftKings, and FanDuel — continue to dominate traditional advertising, one remains absent in online search advertising and marketing, and other invested a minimal amount.

DraftKings spent more than $22 million on television advertising in August 2015, with an additional $8 million spent on Internet display ads, $4 million on magazine ads and more than $800,000 on radio ads, according to Kantar Media. AdGooroo's parent company estimates that DraftKings spent only $9,000 in August on the fantasy football paid-search keyword group analyzed.

FanDuel spent more than $6 million on television ads, $400,000 on Internet display ads and an additional $400,000 on radio ads in August, and spent zero on the Fantasy Football keyword group, per Kantar Media.

The connection between television and search isn't new. Google has talked about the influence of TV on search for years.  With up to 33 million people participating in Fantasy Football, and estimates suggesting the industry generates $2 billion to $5 billion annually, some see not investing in search advertising and marketing as a missed opportunity for DraftKings, and FanDuel.

"DraftKings and FanDuel are clearly missing an opportunity by ignoring paid search," says Richard Stokes, CEO of AdGooroo. "ESPN and the NFL wouldn’t be doing it if it didn’t work."

One thing certain, it would drive up the cost per click (CPC) on related keywords in paid search for Yahoo, ESPN, National Football League and others, but there’s not enough information to know if it would be a meaningful increase, maybe a few cents or dollars, Stokes says.

The group includes Yahoo, National Football League, ESPN, and CBS Sports. Of those four advertisers, only ESPN increased its August spend on the keyword group to $624,000 in August 2015 — up from $448,000 in the year-ago month, according to AdGooroo.