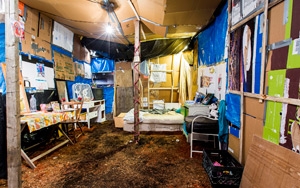 There are some 863 million people globally who live in slums, without any access to water, electricity or a decent shelter to live in.

Now, Techo, a nonprofit organization in Latin America and the Caribbean, is teaming with Bravo/Y&R to raise awareness for poverty/slum living conditions by giving millennial New Yorkers a taste of slum life.

The concept worked by first developing The Pop-Up Slum as an apartment located in New York City's Union Square. The apartment was transformed into a real slum and filled with hidden cameras, and then placed in the real estate market as if it was a regular apartment listing.

There were 23 walk-ins during the entire “Open House,” which was led by one of Techo volunteers who posed as a realtor. Claudio Lima, chief creative officer of Y&R Miami/Bravo, was surprised by the "visceral" reaction of people when they saw the space. "People literally hated it and some didn't even want to walk in past the door," he says.

These responses were then compiled into a video that appears on Facebook and across social media. The Facebook video has already attracted about one million views.

In all, this effort is part of the group's #ZEROSLUMS initiative, which aims to eradicate poverty and build stronger communities across the continent. "We created a whole social media campaign around the initiative, with posts, videos and community management," says Lima. "Also this 'slum' became a traveling installation and is being used on events to give other people the same experience."

Although it was a pop-up, it had 'social media' as its ultimate goal, says Lima. "We've done the pop-up as an Open House for a day in NY and had dozens of visitors, but the main goal was to be able to share this experience with hundreds of thousands of people through the film that came out of it. Plus, we really think that people needed to "live" the experience of what a slum looks like from the inside and we wouldn't achieve this if we had done only a digital experience."

Bravo/Y&R created and produced the initiative and the digital components of the campaign pro-bono. Techo has been a client for Y&R for more than five years, not only in the U.S but in several Latin American countries.