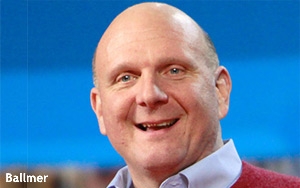 Given Ballmer’s penchant for brash behavior and his blemished track record with consumer-facing products (remember Zune?), it is not clear whether the investment bodes well for the social giant.

Less than a year after stepping down as Microsoft’s CEO, Ballmer officially resigned as the company’s chairman in August. He remains the software giant’s single-largest shareholder.

Ballmer, who acquired the Los Angeles Clippers for $2 billion last year, said he saw the pro basketball team, along with “civic contribution, teaching and study,” taking up much of his time.

Kordestani filled the seat recently left open by Twitter co-founder Jack Dorsey after he returned as CEO. Kordestani is expected to serve in an operational role at Twitter, where he is lending his years of experience to its restructuring and recruiting efforts.

“Omid is a proven & experienced leader, who will directly help & coach me and our leadership, and help us recruit the best folks to Twitter,” Dorsey tweeted on Wednesday.

Kordestani’s appointment came a day after Twitter announced plans to cut upwards of 336 staffers, or about 8% of its workforce. The cuts are part of Dorsey’s desperate efforts to improve Twitter’s outlook.

In a letter to employees released earlier this week, Dorsey said his team was “working around the clock to produce streamlined road map for Twitter, Vine and Periscope.” He added that Twitter’s core focus is on “experiences which will have the greatest impact.”

To that end, Twitter debuted a new Moments service, last week. Formerly named Project Lightning, Moments is squarely aimed at the millions of consumers who have yet to embrace Twitter in its current -- and what many call confusing -- form.

Also this week, Twitter assured investors that third-quarter revenue and adjusted profit would meet or exceed earlier forecasts. The company previously said it expected ranges of $545 million to $560 million and $110 million to $115 million, respectively. Third-quarter numbers have yet to be reported.