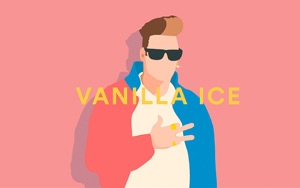 It is a wonder why it has taken this long, but rapper Vanilla Ice is celebrating the joys of vanilla ice cream as part of a new campaign to raise awareness of online casino brand Casumo in Finland.

Developed by agency Swedish agency Perfect Fools, the campaign focuses on the international gaming brand’s desire to “erase boredom” by encouraging consumers to a visit the website http://tuhoatylsyys.com which means Erase Boredom in Finnish.

The premise: the more content consumers share and watch at the site, the happier that they and, therefore Finland, will become, thus raising the brand's awareness and delivering on its mission to erase boredom.

Under this concept, Perfect Fools conducted research to discover what Finns find boring. Then, creative was designed to find joy in these previously boring areas.

The first phase of the tongue-in-cheek initiative is aimed at rehabilitating the reputation of vanilla ice cream, voted Finland’s most boring ice-cream flavor.

To help boost its appeal, a video shows Vanilla Ice talking to an audience of vanilla-hating Finns and taking "desperate measures" to persuade them that it’s the best flavor around, including rapping in Finnish, singing the national anthem and telling ice-cream related jokes.

Although this campaign is entirely in Finnish, the language barrier didn’t appear to pose a problem for the rapper. "In terms of enthusiasm, Vanilla was totally game for getting involved and jumping in head first into this task," says Philip Arvidson, Art Director at Perfect Fools…He does not speak any Finnish and has no knowledge of the language, but dove into the Finnish whole-heartedly, as well as learning some key Finnish phrases for the call."

Video can be seen here.  Content will be backed via paid support in the form of pre-rolls and seeding, designed to drive traffic.

“We’ve had to identify a more creative way to showcase the fun that Casumo offers. By literally bringing the brand promise of ‘erasing boredom’ to life through content such as our time with Vanilla Ice we are able to associate the brand with fun and build awareness,” says Arvidson.

Casumo is currently accessible across Northern Europe, though the online casino is swiftly expanding its footprint and services to become more of a global brand. This month, Casumo announced a deal with game developer Evolution Gaming to introduce its entire offering of live casino tables for desktop, tablet and mobile devices. Casumo also recently introduced its operations to the UK.