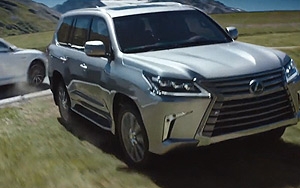 Lexus has launched an advertising campaign for its refreshed 2016 Lexus LX 570 SUV. The message is that the SUV is an automotive Royal Robbins — It can handle the verticals, and the dress sharp for dinner. The TV spot, shows the SUV competing against a sibling. No, not the GX or RX, but Lexus flagship sedan, the LS.

The LS does the car-on-switchbacks sports sedan beauty drive, while the SUV dispenses with the asphalt, heading straight up the mountain. After crossing paths several times, they hit the roof simultaneously.

The online part of the campaign shows the car going off-road up a mountainside, with closeups suggesting the vehicle is a Dakar Rally contender, not a luxury SUV. Then, when we see the truck, it's the LX clambering onto the last turn of an alpine road to a mountain-top resort with more stars than the Pleiades.

Lexus says the campaign, via Team One, is rolling into broadcast, digital, print and out-of-home, with TV on prime-time, late-night cable and sports programming. The media commit for the latter includes Thursday Night Football on CBS, ESPN College Football, English Premiere League soccer on NBC, and the NHL on NBC. As part of the sports vector for the campaign, Lexus will do a social media event starting this Thursday during halftime: live stunts shot inside the LX will be simulcast on multiple social platforms, according to the Torrance, Calif.-based luxury unit of Toyota Motor Sales. Mobile is part of the effort, thanks to a deal with Millennial Media, and UrbanDaddy.com, plus an update of the Flipboard digital magazine that Lexus launched back in 2012 to support the 2013 ES sedan.