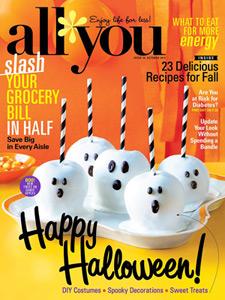 Big changes are afoot at the country’s biggest magazine publisher: Time Inc. is shuttering All You magazine, effective with its December 2015 issue. It is acquiring HelloGiggles, an online media company which targets millennial consumers with pop culture, beauty and lifestyle content.

Launched in 2004, All You targeted value-conscious female shoppers and was loaded with content, including product reviews, recipes and do-it-yourself projects, along with substantial savings from discounts, coupons,and special offers. All You, centered on a newsstand and checkout display distribution deal with Wal-Mart, making the magazine a good fit for advertisers across a number of categories sold by the retail giant.

However, it wasn’t immune to the trends affecting the rest of the magazine industry, as readers transitioned to digital media and advertisers followed. Time Inc. noted, “More recently, All You has faced a particularly difficult landscape in the shopper marketing space, as well as endemic newsstand challenges.”

Time Inc. will try to move as many All You employees as possible to other positions in the company, the publisher said.

Turning to more positive news, Time Inc. also announced the acquisition of HelloGiggles.com to broaden its reach among millennial women. Terms of the deal weren’t disclosed, but The Wall Street Journal cited one unnamed source who said the acquisition probably cost around $20 million.

Time Inc. is incorporating HelloGiggles into its celebrity group, along with People and Entertainment Weekly, but the site will remain as a standalone brand and retain its own headquarters in downtown Los Angeles. The Web site currently attracts around 11 million unique visitors per month, and the audience has an average age of 26, per the WSJ.

In an interview with People and Entertainment Weekly president Rich Battista, who joined the company in March, said Time Inc. would help HelloGiggles scale up its video and advertising operations, as well as expanding to TV, movies, books, e-commerce, and live events.

People and HelloGiggles were already collaborating on custom integrated advertising campaigns, with People selling inventory on HelloGiggles as an ad sales representative.