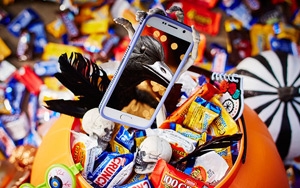 Target is cooking up all kinds of digital treats for Halloween-obsessed parents, with a haunted virtual-reality experience on YouTube and a social network that will let kids maximize their candy haul.

The YouTube video series is called “The House On Hallow Hill,” and includes several vignettes, all shot within a haunted mansion in St. Paul, Minn. Viewers can tilt and turn their phone screen to view each of the scenes just for the creepiness of the video: There’s a graveyard, for example, a ghoulish dining room and a festive skeleton cantina. But they can also tap on a shop button that that allows them to purchase any or all of the items included in the film, from costumes to candy to décor. (The experience, created by Target’s in-house creative team, starts with a raven snatching the viewer's phone, and ends with the bird’s selfie.)

A spokesperson for the Minneapolis-based retailer says it was important to launch it well ahead of Oct. 31 because “this is a really important time of year for our shoppers, and social conversation is so high for the few weeks leading in,” she says.

Retailers are increasingly focusing on longer lead-in times to such big events. RealityMine’s analysis of last year’s online Halloween searches, for example, found that while the week before Halloween is the busiest, it accounted for just 21% of all searches, 79% of Halloween searches were done before the final week.

The Target spokesperson says YouTube made the most sense for this holiday. “We know they are online looking at You Tube videos for inspiration and how-tos, so we wanted to create a fun, innovative experience,” she tells Marketing Daily.

The company also plans to introduce Treatster beginning Oct. 26. Developed by agency 360i, the social network lets parents vote on the best houses to hit for Halloween. Using crowdsourcing and Google maps, the mobile Web site will let parents drop a pumpkin where ever they see a house that looks like it be a can’t-miss experience for kids. The more parents who up-vote it, the larger the pumpkin gets.