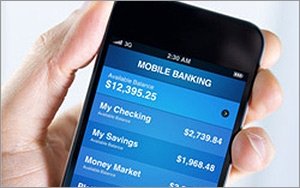 For a look at the future of mobile customer service -- and mobile banking in particular -- look no farther than Spain’s CaixaBank.

The bank, which operates under the brand la Caixa in Spain, received the highest overall score in a recent worldwide review of mobile banking services by Forrester Research.

In fact, CaixaBank earned the highest score in three of the seven categories in Forrester’s benchmark: range of touchpoints, account and money management, and service features.

What makes Caixa so special?

The brand supports customers across a wide range of mobile touchpoints and devices, as well as offering some next-generation mobile features that few other banks currently provide.

For example, CaixaBank is one of the very few banks to provide mobile banking users with predictive tools such as likely future spending based on their spending history, and past behavior rather than payments they have manually set up.

Other banks that stood out with their impressive mobile banking capabilities include Westpac in Australia, Canadian imperial Bank of Commerce and scotiabank in Canada, Bank Zachodni WBK in Poland, Commonwealth Bank of Australia (CommBank), mBank in Poland, and Lloyds Bank in the UK.

Like CaixaBank, these top performers have all introduced substantial improvements over the past year, including a range of transactional features and functionality.

The most successful banks share an iterative, “test and learn” approach to mobile, according to Forrester.

For banks and other mobile customer service teams looking to improve their offerings, Forrester suggests identifying mobile moments and context. That means mapping out the mobile moments in their customers’ journeys, and cataloging opportunities to meet their needs in context.

It’s also important to design the mobile engagement by deciding how to engage customers via mobile. Forrest recommends prioritizing the mobile moments and opportunities that will be most valuable to both customers and the bank.

For its findings, Forrester used its Mobile Banking Functionality Benchmark methodology to evaluate the retail mobile services of 41 large retail banks around the world, between mid-March to early-April of this year.