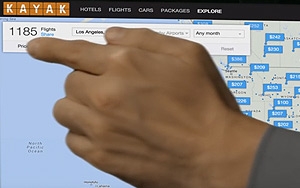 Web sites may offer the best deals abound, but beyond showing the best prices, there’s little differentiation to attract consumers to one site over the other.

In an effort to separate itself from its competitors, Kayak is launching a digital campaign showing off several of its tools intended to make travel planning more user-friendly. The videos, positioned as time-saving “Travel Hacks,” can help potential travelers become more knowledgeable about how they’re spending their travel planning time and money.

“The online travel space has become really crowded and competitive,” Sophie Mayer, founder and managing director at Berlin-based agency The Adventures Of, which created the campaign, tells Marketing Daily. “Travel planning is highly stressful and learning any trick can be helpful.”

The videos, which will live on Kayak’s site (as well as run on Hulu, YouTube and various social channels), introduce potential travelers using travel Web sites to plan their trip. As they ponder whether they’re getting the best deal or heading to the right place, a “false expert” (in the form of a fortuneteller form a pop-up ad or portrait on a coffee mug, for instance), comes to life, but doesn’t offer any tangible solution. Finally, the traveler is presented with Kayak’s site and tools (such as its “Price Forecast,” which tells users the probability of whether prices will go up in the next week) that solve their problem.

“Kayak’s brand strategy is about solving travel problems. We establish the travel problem, and we solve it with a very useful tool,” Mayer says. “It’s very much in line with the brand positioning. The products don’t have an agenda; they only exist to make travel better.”

The agency has produced three videos so far. In addition to the Price Forecast tool, featured tools include “Explore” tool, which allows travels to see destinations that fit their budget, and “Trips,” which helps keep track of travel documents and information. Because each video will be released in English, French, Italian, Spanish and German to run in international markets, the agency needed to find an idea that crossed language and cultural barriers.

“We had to create something that was universal and used universal storytelling,” Leila El-Kayem, founder and creative director at The Adventures Of, says. “It was about telling [the story] in simple language what these tools are called and what they do.”