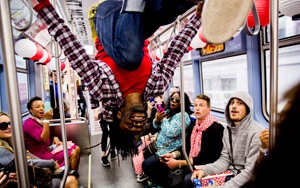 Uniqlo is opening its first store in Chicago and came up with an unexpected way to introduce itself to the locals: It’s sponsoring take-overs of Chicago Transit Authority subway cars, hiring DJs and bringing its party to the people.

“Unless they’ve traveled outside Chicago, not a lot of people are familiar with the brand,” says Ebenezer Bond, CEO of Invisible North, the experience agency that organized the events. “While it’s similar to other fast-fashion companies, it’s not like a Topshop or Forever 21. It specializes in basics, and it’s got this quirky, fun brand personality.”

Bond says his agency had been eager to use Chicago trains for a brand promotion ever since last winter, when the CTA first began chartering out cars for smaller events, like birthday parties. “And we thought Uniqlo would be the perfect marriage of idea and brand. It was a unique way to gather a captive audience and make a splash,” he tells Marketing Daily. It's the CTAs first brand partnership, and while Uniqlo relies heavily on transit advertising in new markets, Bond says it’s the first time the Japanese-owned Uniqlo has used an immersive experience.

The five weekly events started last month and are ending with the store’s grand opening. Each of five party trains had room for between 300 and 500 guests each, 70 guests at a time. After RSVPing and checking in outside the station, partygoers had a chance to join the two-car Uniqlo dance party, complete with games, giveaways and the store’s fashions, as the train looped around the city.

While the response has been positive, Uniqlo faces some stiff fast-fashion competition in the Midwest: The immense new store (its second-largest in the U.S., after the New York flagship) is located on Michigan Avenue, close by Britain’s Topshop and Sweden’s H&M. And Inditex’ Zara is also already well-established.

Uniqlo, owned by Fast Retailing Co., has more than 1,400 stores around the world, and has ramped up its U.S. expansion, beginning with the Northeast and San Francisco Bay area, as well as Boston, Los Angeles, and Philadelphia.