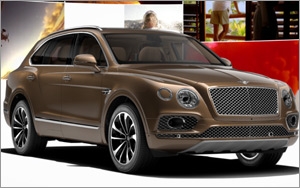 Bentley has an SUV called the Bentayga. The sky may now fall. And the ultra-luxury car brand, a unit of Volkswagen A.G., is promoting the vehicle with a marketing program called the Inspirator, that uses facial recognition software for iOS cameras to let you configure the vehicle using your iPhone.

The company says the program interprets 200 touchpoints on the user’s face at four frames per second, as they react to stimulating film content. The film changes according to what the user responds to most positively, but also deciphers their preferences, creating a unique configuration revealed at the end of the film.

A virtual guide prompts the user to consider what kind of features and finishes best suit their lifestyle and preferences.

Kevin Rose, board member for sales and marketing, said in a statement:  “Configuring a Bentley is an intensely personal experience; it is a reflection of your personality and taste. The Inspirator aims to understand the inspiration behind the process of specifying a car. It provides intelligently curated responses which can be personalized further to truly make the car your own.”

Well, one thing Bentley shoppers might have, in addition to a lot of discretionary cash, is a need for speed. The new vehicle, which has a 12-cylinder powertrain, is the fastest SUV in the world, and the most expensive, coming in around $300,000 (take note, Floyd Mayweather, Jr.)

Although based in Crewe, England, Bentley has been a unit of Volkswagen, A.G. since 2003. The German automaker spent over $840 million rehabilitating the Crewe plant. On Wednesday, Fiat Chrysler Automotive officially went in the opposite direction with another iconic luxury brand, Ferrari, which began trading on the NY Stock exchange under the ticker RACE. FCA, which now only owns just over 9% of the stock stands to make around $4.2 billion from the spinoff.