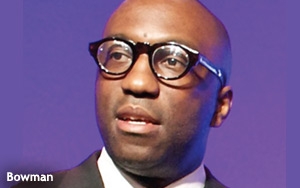 By 2020, more than 45% of consumers will be multicultural, yet those crafting advertising messages to this audience are typically middle-aged white guys, says Jeffrey Bowman, former senior partner/managing director at Ogilvy & Mather.

After leaving the agency in April, Bowman is now launching Reframe, a new business education platform to help prepare agencies and brands to better navigate, understand, prepare and strategize for diversity in the marketplace.

"The idea is how to make people comfortable about having a conversation about people who don't look like them," says Bowman.

The Reframe platform is designed to educate users with four core features. First, the Community works as a peer-to-peer conversational platform in order to get people discussing best practices, ideas and opportunities centered around diversity. "You need to be able to ask questions and get the conversation going," he says.

Second, the publication serves as a hub for curated content, news and related stories. "We will write our own articles, as well as feature outside contributors," says Bowman. Third, the Lab works as a resource for online and offline training, education and certification. Similar to school, clients go through "levels one to five in order to get certified," he says.

Finally, the Event will host events to allow users to learn and network about multicultural opportunities.

Ad agencies are one of his key targets to sign on for this platform, adding that the 4As and ANA are two organizations most interested in his services. "There is a lot of [willingness] in wanting to be educated in order to become a better business," says Bowman. "People are still using the same model that they did back in 1965."

Still, one key challenge has been overcoming structural barriers. "It's been hard to get people to shift their thinking when it's associated with a $300 billion platform." he says. "When there's money involved that is that large, it is hard to [elicit] change."

Nonetheless, Bowman believes that it is only a matter of time before businesses recognize the importance of his concept. "Remember when digital was its own separate area? Now everyone is expected to understand digital. It's the same awareness for diversity."