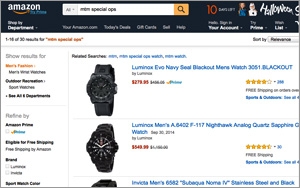 Siding with Amazon, a divided appellate court has ruled that the retailer's search engine doesn't infringe watch manufacturer Multi-Time Machine's trademark by responding to searches for its name with links to other companies' watches.

"The search results page makes clear to anyone who can read English that Amazon carries only the brands that are clearly and explicitly listed on the web page," 9th Circuit Court of Appeals Judge Barry Silverman writes for the majority in a 2-1 decision.

Silverman's ruling marks a reversal from July, when the same three-judge panel ruled against Amazon by a vote of 2-1. In that earlier decision, Circuit Judges Carlos Bea and Gordon Quist concluded that Amazon potentially infringed trademark by causing so-called "initial interest confusion," which the judges described as confusion that "creates initial interest in a competitor's product."

The company argued that Amazon's practice differs from that of other e-commerce sites, like Overstock and Buy.com. “Other online retailers that do not carry MTM Special Ops watches clearly inform their customers who search for such watches that they do not offer them for sale, before suggesting alternative watches to the customer,” the watch company contended.

Multi-Time Machine appealed to the 9th Circuit, which initially said that the company was entitled to have a jury decide whether Amazon's search results might have confused consumers. Silverman dissented from that holding.

Soon after that first decision came out, Amazon asked the 9th Circuit for reconsideration. Google, Twitter, Pinterest, eBay and Yahoo backed the request, arguing that Amazon shouldn't have to face a trademark infringement lawsuit based on "a mere possibility of confusion by an unsophisticated consumer."

The companies added that they were concerned that the panel's opinion could "give rise to a tide of trademark lawsuits based on only a speculative possibility of confusion."

Bea, who authored the earlier opinion that sided against Amazon, dissented from Wednesday's ruling. Bea wrote that a jury should decide whether the search results are confusing.

"A jury could infer that the labeling of the search results, and Amazon’s failure to notify customers that it does not have results that match MTM’s mark, give rise to initial interest confusion," Bea wrote.