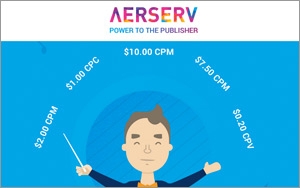 Telerik is a company that helps streamline the app creation and development process. With 1.7 million developers using their services and customers like NASA, Microsoft, IBM, and Sony, they are well established in the app developer world.

“The sooner content developers start monetizing, the sooner they can reinvest their money,” says AerServ CEO Josh Speyer. “We want to make it really easy for them to integrate mediation with video.”

Mobile video is a hot ticket item in the mobile advertising world, with higher CPMs and engagement rates than static banner ads.

App developers that don’t monetize their apps before launch often have to incorporate a number of software development kits (SDKs) created by others in order to enable in-app branded content.

SDKs, while extremely useful for expanding the functionality of apps and helping them monetize, are somewhat notorious for adding complexity, thereby slowing down load times on apps. Depending on the mediator a developer works with, this can mean installing any number of SDKs, all of which need to be updated. That can be a burden to the user.