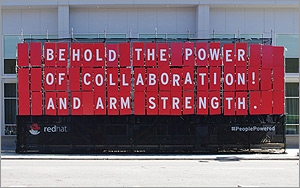 As businesses move their data to the "cloud," many are seeking open source software providers such as Red Hat to deploy, develop and manage applications. Yet, communicating these services to potential clients can be challenging.

This is why software provider Red Hat is partnering with Raleigh, NC-based agency Baldwin& to help convey its expertise in open source collaboration or as the company puts it, “The Mastery of the Many.”

An activation developed by Baldwin& demonstrated collaboration both physically and virtually by filming sixty-three volunteers - several Red Hatters plus a few friends - as they sat in a tiered grid, 17 feet off the ground, to create a 14’ x 50’ “people powered” billboard. The participants flipped 2.5’ x 4’ placards, stadium style, to create self-referential headlines such as “Behold the power of collaboration! And arm strength,” “You should see our synchronized swimming routine,” and “We have more to say on collaboration but space is kind of limi.”

The human billboard, at the Raleigh Convention Center (during an open source conference)  was live for two one-hour sessions on Monday, October 19. Audience queries were invited and one signer live-Tweeted responses from behind his placard with the hashtag #PeoplePowered.

Time-lapse, and stationary and drone camera footage of the event has now been turned into a 98-second video, that runs across Red Hat’s owned Facebook, Twitter and Instagram channels.

"In order to make a big impact, we needed to build a really large structure," says Weigel. "That was the biggest challenge [to] creat[e] a structure that was big enough to hold 63 people, and keep them all safe at the same time."

Baldwin& developed and executed the concept, and worked with event production company Billups and Myriad Media, Raleigh to film the actual event. “Nothing like this event had ever been done here in Raleigh before, so getting to understand the logistics, permitting and choreography it required felt incredibly daunting," says David Baldwin, lead guitar, Baldwin&.

This is the first project the advertising agency has developed for Raleigh-based Red Hat.