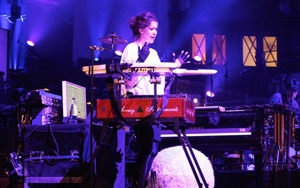 Most teaser campaigns are more about anticipation than participation, more like looking at a beautifully bow-tied package than pulling the ribbon and slowly unwrapping it. With the multichannel campaign “Reshaping Excellence,” electronics company Sennheiser isn’t just telling audiophiles that a monumental change is coming to the way they hear sounds. It’s inviting them to join in as the story unfolds.

The campaign launched at a concert featuring Imogen Heap and Junge Deutsche Philharmonie in August. Heap — who “uses her knowledge of the web and social networking to communicate and collaborate with her loyal following in pioneering ways,” as her SoundCloud bio puts it — is an imaginative and innovative artist much in the spirit of the campaign.

At the event, which she had promoted on social media, Heap offered the debut of “Tiny Human,” a song “created for Sennheiser” about her infant daughter, Scout. An interpretative video version of the song was released this month on YouTube.

After the performances, the German-based company’s co-CEOs, Daniel and Dr. Andreas Sennheiser, teased the audience — both those within London’s Central Hall Westminster and others watching on a live steam  — with a glimpse of the new headphone. Sennheiser has subsequently revealed product details such as handcrafted leather ear cups and a frequency range “only perceivable by the combined hearing abilities of bats and elephants.”

Words don’t really do justice to attributes like these, however, which may be why Uwe Greunke, director of global marketing, says the company wants to build “an atmosphere” rather than focus on the product.

“This is clearly a change in strategy,” he says. “And of course the products are still very important to this concept, but there’s so much more to discover in music” — and to rediscover, as consumers have become accustomed to the compressed tones of MP3s played on their smartphones.

And so, until that product — an “era-defining” one at that, according to the company — it actually unwrapped, it is attempting to build a mythology around a “monument to sound.”

With the idea that “collective storytelling” is vital to the creation of all myths, Sennheiser last month launched a dedicated website where users are asked to build their own “sound sculpture” by clicking on a jagged boulder that has fallen from a primordial sky. Each click generates a resonant note and chips away at the rock. Users can send their completed smoothed “sculpture” to a large monument being shaped by all of the users’ contributions — each with their own “unique timbre, melody and soul.” And, of course, you can share what you’ve done on Facebook.

“We are building the next big thing, in a nutshell,” Greunke says, “with an emotional approach” that he likens to campaigns for luxury brands such as Rolex. There’s also a comparison to be made with GoPro’s content challenges, which put the focus not on “nitty-gritty features” but rather on how its enthusiasts use the camera. So, too, with the participatory Sennheiser campaign.

“The idea is to generate new experiences in audio by using our product,” Greunke says.

The Reshaping Excellence website trended on Reddit a few days after its launch. It also won “site of the day” citations from Awwwards and England’s Favourite Websites Awards.

The next “reveal” is scheduled for Nov. 3 and will apparently build on the monument, which was 63.4% towards its goal of a million individual sound sculptures the morning of Oct. 23.

As someone who heard Miles Davis in ways I had never heard him before after donning a pair of Sennheiser HD 414 headphones about 40 years ago, I admit to being thoroughly beguiled by what, at this point, is pure hype building. Whether or not the myth actually gets created, of course, will depend on whether the product delivers a similar experience for audiophiles more discerning than me when it rolls out.