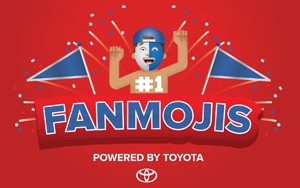 Toyota, as part of a new sports marketing campaign, has launched a pallet of emojis, or “Fanmojis” with football themes. The campaign -- intended to fuel the automaker's more people and fun-centric identity -- is a mobile program that centers on an iOS/Android app serving football-related icons meant to entice fans to Tweet and email them during games to express their feelings about what's going on.

The app, via AOR Saatchi & Saatchi L.A., includes built-in social media access, or can be installed as a custom keyboard via SMS and other messaging services. The effort is paired to an integrated ad campaign, including four TV spots that talk about fandom with an "IT happens" theme.

Florence Drakton, manager of social media strategy and operations at Toyota Motor Sales, U.S.A., tells Marketing Daily that Saatchi & Saatchi came up with the idea as a way to support the 360-degree campaign through social channels, but with a focus on creating an aura of lighthearted fun around the brand. “In the more traditional broadcast ads we had Corolla, Camry and Tacoma, but this is really a brand effort.”

She adds that the plan is to kick up some emotion for a brand that has been historically seen as a logical choice. “It is moving the brand toward a more exciting and inspiring place. Hopefully, consumers are starting to see the lighter side, in terms of how we engage them with more humor, and find ways of providing a benefit in the relationship,” she says.

There is subtle branding in the emoji app. In addition to the Toyota name, some of the emojis are abstractions of Toyota vehicles: a Tacoma, a red Camry and a blue Corolla.

“We really felt like it was a nice tie-in to what we already do as sponsors of several sports, venues, leagues and subsidiary partners,” says Drakton. “It’s more upper-funnel engagement we are looking for, by giving fans and [Toyota vehicle] owners a way to express themselves.”

The FanMojis are a free download at the  Apple Store and Google Play Store. The four new sports-themed TV spots are also on YouTube.