ABC Mines Lifestyles Of Decades Past For Modern-Day Shows 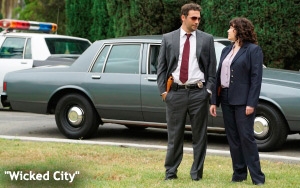 More than any other network (including the History Channel), ABC seems obsessed with the past.

The newest example is this new drama premiering Tuesday night called “Wicked City” centered on L.A.’s Sunset Strip in the summer of 1982. As I mentioned in my review the other day, the show’s 1982 time frame doesn’t seem to have been chosen for any particular reason relating to the show’s serial-killer storyline. Instead, “Wicked City” seems to have been dropped randomly into the early ’80s just for the hell of it, as if someone thought it would be fun to dress the show’s sets with really old computers, telephones and cars (such as the one in the photo accompanying this blog).

Harkening back to decades past has emerged as a mini-trend on ABC. “The Goldbergs” takes place in the 1980s too. The show’s season premiere last month was a send-up of the Tom Cruise movie “Risky Business,” released in 1983.

“Back before e-mail and Skype, the only way to stay connected was to talk on the telephone,” said one line of narration recited in the episode by narrator Patton Oswalt. Really? Is the world of 1983 such ancient history today that a narrator in a modern-day TV show about the ’80s has to explain that cellphones and the Internet weren’t around back then?

Well, to anyone not living then, 1983 might seem like a long, long time ago -- 32 years to be exact. For someone my age, it would be like having a TV sitcom airing in, say, 1975 about life in 1943. “Back before TV, the only way for a family to entertain themselves without paying 25 cents each to go to the movies was to listen to the radio,” a narrator on this sitcom might have said about an era I could not fathom.

It’s not a long leap in time to jump from the 1980s to ’90s, which is another decade now being re-created each week on ABC in another sitcom, “Fresh Off the Boat.” Like “The Goldbergs,” which is based on creator Adam Goldberg’s memories of growing up in an outlying Philadelphia suburb in the 1980s, “Fresh Off the Boat” is based on a memoir by Eddie Huang about his family’s experiences as an Asian-American family in 1990s suburbia.

In this week’s episode (Tuesday night at 8:30 Eastern), the ’80s and ’90s get a Halloween mash-up when dad Louis Huang decides to dress up as Mr. T -- specifically as Mr. T’s character B.A. Baracus from “The A-Team,” an iconic 1980s TV series if there ever was one.

It’s probably no coincidence that “Fresh Off the Boat” has been positioned on ABC’s schedule to follow “The Muppets,” airing Tuesdays at 8 p.m. This new “Muppets” sitcom takes place in the present day, but it stars a group of lovable characters whose height of popularity stretched from the late ’70s through the ’80s and ’90s via movies and TV. ABC’s intention with “The Muppets” seems obvious: Create a modern-day series that will nonetheless appeal to viewers seeking an injection of feel-good nostalgia.

ABC’s interest in mining the past is not exactly new. One short-lived example was the series called “Life on Mars,” which lasted a few months during the 2008-09 season. This show had a New York cop (played by Jason O’Mara) who was hit by a car in 2008 but when he awoke, he found himself in the New York of 1973. Among other touches I remember from the show, his fellow NYPD detectives from 1973 were all scruffy types -- with long hair and mutton-chop sideburns. Their hairstyles were not enough to make the show a success and it soon died.

What should we make of the nostalgia trend on ABC? Well, that’s a matter of personal taste. Speaking for myself, I’m not one to seek out nostalgic TV shows and movies as a means of reliving the past. In fact, I remember reading once that some psychologists consider nostalgia to be a form of depression.

On this subject, I prefer to follow the advice of a wiser, older relative who counseled against looking backward. “Keep moving forward,” he liked to say -- which sounds like a good plan.