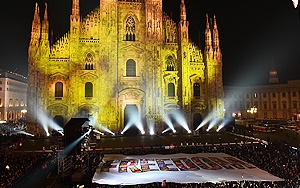 The millions of refugees migrating to Europe are dividing people and countries as they handle the crisis. Some, such as Hungary, are closing their borders; others, like Germany and Sweden, are more accepting of the migrants.

Now, MTV, with help from Young & Rubicam, is launching a social advocacy campaign to encourage young people to get involved with this issue.

“Young people are always on the front lines of social change," says Georgia Arnold, senior vice president, social responsibility, Viacom International Media Networks. "Knowing that the refugee crisis is one of the biggest humanitarian issues the world is facing, it’s critical that we partner with our audience to help them unify globally and raise their voices to make a positive impact on what can seem like an impossibly complex situation."

Developed by Y&R New York, the MTV Freedom campaign invites people to express their support for the refugees by declaring “I am a citizen of Freedom” over social media with the hashtag #EMAfreedom. MTV is also partnering with The United Nations Children’s Fund (UNICEF) to raise funds to aid people affected by the crisis.

MTV is hosting a UNICEF donation page on its EMA website. The company says that 100% of donations will go directly to support UNICEF’s work with refugees via this site.

The concept is designed to illustrate how the world is borderless by launching the Freedom country. “We chose the idea of Freedom because it speaks to the core of the issue driving the refugees to flee Syria," says Leslie Sims, CCO, Y&R New York. "They’re being stripped of their basic human right to feel safe in their own homes. The conversation isn’t just about resources; it’s not just about immigration policies… At its core, the refugee crisis is really about freedom. And it’s important to remember that."

The initiative kicked off Sunday, October 25 during the MTV Europe Music Awards in Milan. During performer Pharrell Williams’ finale performance of his song “Freedom” at the Mediolanum Forum in Milan, Italy, thousands of music fans gathered at the Piazza Duomo, Milan’s main public square, under a 75 x 52 feet flag that represents "the nation of Freedom."

Designed by Hello Charlie, this flag shows the images of every recognized country’s flag to underscore how the Freedom flag "unifies across all countries around a common goal -- to show the world that Freedom has more citizens than fear or prejudice," say agency executives.

“We wanted to empower young people to have a voice other than what their governments, schools or communities might be saying," says Nathalie Brown, VP/group creative director, Y&R. "We wanted it to be a celebration of freedom and demonstration of unity, as opposed to something political and divisive. We also wanted to avoid dwelling on the negative, and give people a sense of hope that they can make their voices heard, and they can make a difference.”

It was a key challenge to create a concept that resonates across so many cultures. “There are 28 countries in the European Union, and people in each one of those countries is bound to have a different perspective on the refugee crisis, based on how they are being impacted by the movement of the Syrians in their local area," says Kate Lummus, associate creative director, Y&R New York. "But there are some truths that are universal. Freedom is unifying, moving, and inarguable. And deserves to be shouted from the rooftops at an event that was being televised and live streamed globally.”

Y&R donated its time and resources to create and develop the MTV Freedom concept pro-bono. The agency is an advertising partner for MTV’s Staying Alive Foundation and this project arose out of ongoing conversations with the team at MTV and Viacom.